Marcus has been to an „International Consultation on Missions in Sweden” from April 20th to 24th 2006. „InterAct“ is a missionary movement of the „Evangeliska Frikyrkan“ in Sweden and had invited people and organizations interested in doing mission or 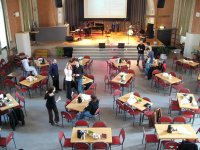 church planting in Sweden. Different speakers, some of them highly ranked, talked about cultural, spiritual, and social conditions in Sweden, brought in statistics, and explained their view about changes of the 21st century. They gave explanations on difficulties and opportunities of doing ministry in Sweden and introduced some practical projects and implications. Participants in the conference have been missionaries, church planters and leaders of several mission agencies and Bible schools from all over Europe and the US.

Three issues turned out to be important for us:

First: We are invited and welcomed to Sweden! Nothing became as clearly as that point. Every speaker of the conference invited officially and warmly to come to that Scandinavian country for planting churches or doing other missionary ministry. We are welcomed to practice both proven methods as well as new approaches. Isn’t that awesome?

Second: We need a partner. This was recommended strongly and repeatedly. Swedes are strongly interested in security and need trust and credibility. This points to the requirement to look for a local or national church or organization to partner with in order to gain more trustworthiness. Many independent church plant efforts have failed because of the lack of a partner.

Third: We need to think over the idea of an English speaking church. Swedes are usually fluent in English which suggests that an English speaking church might work well (as it is true in Holland for instance). However, there are recognizable differences to Holland. Swedish hearts get more open as soon as you start to talk to them in their mother tongue. The experiences of a Dutch church planter in Stockholm who leads a bi-lingual church were valuable particularly in that issue. English reaches out to migrants from all continents, less to Swedes.

The consultation gave us confirmation and encouragement on our path. We got plenty of important information and a number of strategic contacts. We are very grateful about that. Please give thanks to God for that and pray for further guidance and wisdom in our preparation process! 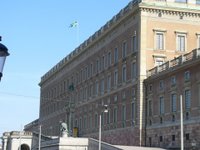